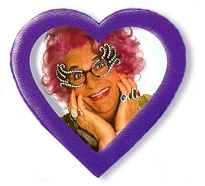 "I am sadly leaving my Off Broadway (way way way Off Broadway/Engagement), DAME EDNA: THE ROYAL TOUR 'An Appropriate Show', but I will return! NYC in the fall!"

Much to the delight of the SRO audiences and critics, Dame Edna Everage is finishing her US preparation for her eventual NYC engagement and Broadway debut by (STARRING) in DAME EDNA: The Royal Tour 'An Appropriate show'. Yes - Off Broadway - way, way, way Off Broadway - that other coast - in San Francisco at the Theatre on the Square, 450 Post Street, 1/2 block from Union Square. The special event is produced by Jonathan Reinis, Chase Mishkin, Steven M. Levy and Leonard Soloway. Scenic design is by Kenneth Foy, with costume design by Stephen Adnitt, lighting design by Jason Kantrowitz, sound design by Elton P. Halley with the fingers of Billy Philadelphia on piano.

Dame Edna is arguably the most popular and gifted woman in the world today. In the flesh, she is "something else!"

"Possums - yes; I am here only until January 17. I'm on the cutting edge, I'm in your face, but I'm also an intensely human and vulnerable woman with a lot to give. Even my gynecologist looked up recently and said: 'Dame Edna, why do you give so much?' Quite simply, Possums, I am still in San Francisco to cure those suffering from a rare disease called EDS (Edna Deprivation Syndrome). I am still spreading my miraculous gifts of caring and sharing in the land of the Golden Gate and eventually to the Big Apple...but first I have to go down under. The demand has been immense to get me back there. But as someone said: I SHALL RETURN!"

"Possums - there are things that I have to do before coming to New York. I know many of you are desperately seeking info on my Royal Tour. 'What tucked away nooks of America will you be visiting after your San Francisco triumph so we can experience your hands-on magic for ourselves and for our wives, children, significant others and same sex partners?', you constantly plead. Here's the bad news possums. San Francisco could be your last chance this century, unless you live in New York. If those big Broadway producers can afford me, I will be there sometime in the Fall."

Dame Edna is preparing for her pet project for the millennium, The Prostrate Olympics 2000. She is sharing her experiences, strength and hope with her adoring American audiences. Dame Edna is also doing a little bit of gentle probing, and as she states "who could complain about that."

The Dames's innovative television presentations have been copied by many, but equaled by none. She has hosted her own chat show, The Dame Edna Experience. She has starred in her own television special for NBC and Fox. Her TV special "Night on Mount Edna" won the foremost European TV Entertainment Award. She has been a very popular interviewee on numerous network television shows hosted by Carson, Joan, Leno, Arsenio, Donahue and Roseanne to drop a few names. She has also performed for the famous NBC TV New Year's Eve Countdown in Times Square, New York.

Dame Edna does acknowledge that her manager (possibly her former manager), the Australian actor Barry Humphries, is claiming that he created this award-winning alter-ego (MegaStar).

Wanna' talk to others about this column or anything else theatre related? Check out All That Chat!