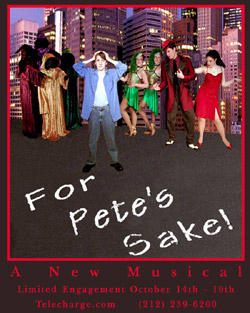 "We're performing on 42nd Street!" That sentiment expresses the awe felt by all 25 teenage cast members of For Pete's Sake, appearing at the Beckett Theatre on Theatre Row now through Sunday, October 19th.

The show is presented by the New York Conservatory for the Arts, located in Hurley, New York, approximately two hours north of the city. Founded in 1986, the NYCA is a project of the not-for-profit Pan American Dance Foundation. They offer a year-round program, educating students as young as age 4 in all aspects of musical theatre - dance, voice and acting. Over the years, some of their alumni have gone on to do professional work in the theater, including Jessica Morton, Master Electrician for Broadway's Hairspray, who gave them a hand in mounting the Beckett production.

For Pete's Sake was originally created for the traveling ensemble troupe to present at the Edinburgh Fringe Festival in Scotland this past August. This was the second original musical written by the creative team of Randy Conti (Book/Director/Choreographer), Jeffrey Stein (Composer/Music Director), and Douglas Farrell (Lyricist/Vocal Director). Their first production, The Adventures of Aladdin, went all out, even incorporating "Flying by Foy" into the show. According to Conti, they wanted the kids to have the experience of flying on stage and seeing how it all worked together.

Giving the kids unique experiences is the common theme expressed by Conti when describing NYCA's goals. They set their sights on a festival in Scotland to give the kids a taste of taking a show on the road. They're now in New York because the opportunity presented itself, and it was yet another experience to offer the students.

The story is inspired by Henrik Ibsen's Peer Gynt and follows Peter through the streets of New York as he's tempted by the forces of love, power, fame and fortune. The score combines all musical styles, from swing to hip-hop to standard Broadway. Conti says, "We wrote this show keeping the teenager in mind. There are a lot of shows like Rent that teens enjoy going to see, but they're not appropriate for all age groups. We were looking to do something that would appeal to the age group that is performing and maybe inspire others to get involved by seeing teens perform. If you see Annie, there are some smaller kids, but there are adults in the cast too. This was to show that an all-teen cast can hold their own."

The teen cast is having the time of their lives. Lead Ron Carlos (Peter) and cast member Joanna Stein (Kelly) are high school seniors. Both are hoping to act professionally and are currently sending out college applications for musical theatre programs. For Joanna, NYCA is a family affair. Her father is Jeffrey Stein, composer of For Pete's Sake. Her mother Diane did the costumes, and brother Matthew took care of projection design. Joanna herself has been with NYCA most of her life and served as dance captain for this production. For her, the hardest part of doing this show is finding the stamina to get through rehearsals because they're very intense. The best part is the anticipation she feels just before the show begins and the moment it starts. "As soon as you set foot on stage, you feel the whole energy of the audience. You suck it in and just spit it back out at them tenfold. I love that feeling of giving to all the people who have come to see it."

Ron says the best part for him is "just being here. I'm sort of star-struck. We're on 42nd Street - we're Off Broadway right now, which is amazing. This is where I want to be for my future. It feels like it's so much power and energy - I'm here! This is what I do and I want you all to watch me."

Tommy Joscelyn, an 11-year old sixth grader and the youngest cast member, began dancing at the age of four. He's very excited to be performing on 42nd Street and to be a featured dancer in one of the numbers.

All three had a wonderful time in Edinburgh. They walked through the streets in the morning, dressed in their costumes, and spoke with the locals. They've clearly built a special bond with the rest of the cast after working together for the past several months.

Conti believes the theatre program is extremely beneficial for the students in all aspects of their lives. He claims most of them earn very high grades in school, and he credits the discipline and focusing ability they've learned through theatre. His aim is to have a relaxed but professional program. While he's at it, he's making some New York Theatre dreams come true this week for a group of exceptional kids.

The show is 90 minutes and presented without an intermission. For more information, visit www.nyca.org.