Anne Runolfsson is one of those rare performers who is equally at home in the theater, on huge concert stages and in intimate cabaret rooms. Her album At Sea is one of my personal favorites and is rarely away from my CD player. She is making one of her all-too-few cabaret appearances this month at The Duplex, and I was fortunate to catch her after a rehearsal for the show. 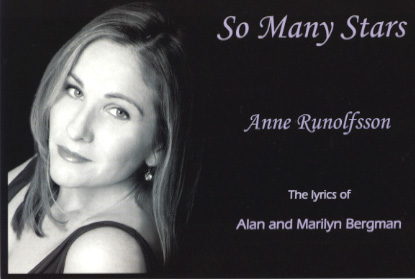 Anne Runolfsson:   Really good; I'm very excited about this show. My husband came up with the concept to do a show around the lyrics of Alan and Marilyn Bergman and I thought it was a great idea. I had met Alan last year when I did something for the Motion Picture Academy ...

JF:   What was the project?

AR:   It was a Richard Rodgers Tribute they did for the Centennial last year. Of course everyone did a tribute ...

JF:   It got to the point where I thought the centennial would never end!

AR:   (Laughs) Well, we won't be around for the next one! Anyway, I started looking at the material that the Bergmans had written and it became clear that there was more than one show there. We're not even doing many of their big tunes. We're doing "A Piece of Sky" from Yentl, which may be their most well know song that is in my show, at least in terms of being a universal song. And we're doing "Fifty Percent," which is familiar to cabaret audiences, but one that the average Joe wouldn't know. We're doing a lot of their older songs: "Nice 'n' Easy," "That Face" ...

AR:   So Many Stars. It's the name of one of their old songs, one of their Latin numbers. Sergio Mendes wrote it with them (sings), "The dawn is filled with dreams, so many dreams, which one is right for me." Now do you recognize it?

JF:   Once you put a melody to it, I do. I don't think I have ever heard the lyrics to it, for some odd reason.

AR:   They did quite a few Latin inspired numbers and initially I thought about doing this cheesy Latin medley, but I decided I didn't want to go there in the show (laughs). As it turns out, the song is this really nice moment in the show. And the title is so appropriate for a show about the Bergmans, who wrote so many star songs.

JF:   What are the dates of the show?

JF:   Is this the first time you've done a show at The Duplex?

AR:   It is! It's part of the Saturday's at the "Plex" series Phil Bond put together featuring me, Jeanne MacDonald and Baby Jane Dexter.

AR:   I was the standby for Julie [Andrews], and for Liza [Minnelli] and Raquel [Welch].

AR:   I went on 120 times total. Once for Raquel, four times for Liza and the rest for Julie.

JF:   And your voice survived?

AR:   Unlike everyone else who did the part! (Laughs) It was really a grueling part.

JF:   What makes the part so hard on people's voices? It's not that rangy a show.

AR:   You know, I really can't put my finger on it ... it's not that other parts like that don't exist. Believe it or not, I have played Fanny Brice and that one is pretty grueling as well! Julie was so relieved to have me complain about the fatigue after playing the part; she was afraid that it was just her. (breaks into a flawless Julie Andrews impersonation) "Anne, I thought maybe it was just because I was old! But you're feeling that way too!"

JF:   You do a killer Julie Andrews!

Part of it may simply be that there are so many costume changes and three production numbers where you're pretty much it. And it's a weird story line: I never felt that the character's payoff delivered a huge release for her. The eleven o'clock number is "Living in the Shadows," which is a rather introspective moment. There's no real place to have a musical or emotional catharsis for the actor. I always felt a bit unfinished at the end.

JF:   Did you perform the tour only in Houston and Seattle?

JF:   Did you have any desire to go on with the tour or were you glad it was just for two cities?

AR:   They wanted a name for the rest of the tour and by then I was pretty much done with the show. I had only been married for a year and a half at that point and I wanted to start a family, which now I have, and it's hard to do that on the road! (Laughs)

JF:   A man pretending to be a pregnant woman probably would stretch the suspension of disbelief a tad too much!

I was in Seattle again a few weeks ago with the symphony, by the way. It was a show featuring songs from MGM musicals called The Glorious MGM Musicals. It's a fantastic show. Jack Everly, who is the conductor, reconstructed the orchestrations from the movies. The studios literally threw them away when they were finished, so the orchestrations were all lost. He painstakingly recreated them, and I have been doing the concert off and on for two years. It is so satisfying. We're going be performing it with the Ottawa Symphony and the National Symphony Pops in Washington D.C. in the upcoming months.

JF:   Was Victor/Victoria your first show on Broadway?

AR:   No. Les Miserables was my first Broadway show; I was the Factory Girl and Fantine understudy and then played Fantine on the national tour. I was also in Aspects of Love and Cyrano: The Musical. The last show I did on Broadway was James Joyce's The Dead where I stood by for Blair Brown.

AR:   I never went on for Blair. When Faith Prince took over the part, I did the show twice because she had concert commitments. It was a gorgeous role and a beautiful story.

JF:   Do you have any projects coming up after your cabaret show?

AR:   I'm doing a workshop of a David Friedman revue next month. We did a performance for some investors a couple of months ago and I was jotting down all these songs that I want to do! (Laughs) I know David very well and have been doing his songs for years but there were all these songs that ... while I had heard them before, they just resonated in a new way. 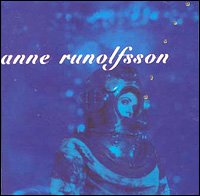 JF:   That's right; you're on the David Friedman compilation album. And speaking of albums, your album At Sea is one of my favorites.

AR:   Thank you! I'm very proud of it. Larry Yurman, the arranger, is a genius. One of my favorite stories about him and the album is about the arrangement of "Ding Dong the Witch is Dead," which is many people's favorite number on the album. Larry literally wrote that chart on the train from Long Island on the way to the session! The ink was still drying on the pages when he gave the charts to the musicians. I'm going to be doing it in a new show Jack Everly is putting together called Divas, and Jack is expanding the chart that Larry wrote for full orchestra.

Are you originally from New York?

AR:   No; northern Orange County. I moved here sixteen years ago, so I feel like a New Yorker. I came out here when I was 20 and stayed for a year before getting a tour. Then I went back to LA and was cast in the LA production of Les Mis and did that for 8-10 months before they brought me out here to do the show.

JF:   While So Many Stars is your first show at the Duplex, it isn't your first show with Phil Bond [manager of The Duplex]. You did a show for the Storefront not that long ago.

AR:   I was in their production of Rags, which was a great event.

AR:   I think there were bits and pieces of various versions ... sort of a 'best of Rags.' It was a very powerful and moving piece. Charles Strouse and Stephen Schwartz both came to the show and Charles mentioned that he thought the reason it didn't work on Broadway was that it was this small precious gem that got too big, which often happens to shows on Broadway. The magic and charm can get lost amidst all the production values. So many times see a show in a rehearsal studio and be completely blown away by it, and then see it fully realized on stage and find that it has lost that magic ... The magic of theater is imagination and the more things get spelled out for an audience, the less creativity and input the audience is allowed to have. To have a small black box production with a small budget can be a blessing.

JF:   And that's the magic of cabaret - no budget and lots of heart! (Both laugh)

AR:   I'm so looking forward to doing another cabaret show. When I did the sound check today, I looked around the room and it is so nice and intimate. I'm not looking at 5,000 seats and having 40 pieces behind me, which is going to be nice. The show is guitar/bass/piano and it's going to be a lot of fun.

For more information on Anne and to hear samples of her CD, At Sea, visit her website: www.annerunolfsson.com.