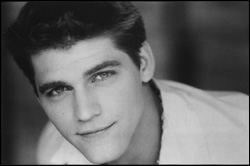 SpeakEasy Stage Company in Boston, which has been home to a very successful run of Laurence O'Keefe's musical, Bat Boy, will be featuring a concert featuring O'Keefe's songs. The show, entitled Show You A Thing or Two: The Music of Laurence O'Keefe will be running this weekend (April 26 and 27) and one of its stars, the original Bat Boy himself, Deven May, was kind enough to talk to Talkin' Broadway.

Jonathan:  Welcome to Talkin' Broadway Deven. It is one of my biggest regrets that Bat Boy closed before I moved to New York, but I did get to see you reprise some of the songs in Larry O'Keefe's show Straight Man's Guide to Show Tunes at the Chip Deffaa International Theater Festival. Is the show in Boston basically the same show?

Deven:  No, it's a brand new show. That one was more focused on Larry putting together and performing a compilation of his music. This features more songs from shows that Larry has written for the Actor's Gang out in Los Angeles.

JF:  Hopefully it will include one of my favorite songs of his, "The Sensitive Song."

DM:  Yes, that will be performed, although some of the lyrics will be changed since it contains expletives that some of the younger members in the audience shouldn't hear. (Laughs)

JF:  How many people are going to be involved in the show?

DM:  Most of the cast of the Boston production of Bat Boy will be involved. Mo Rocca from Comedy Central's Daily Show will be there; he and Larry went to college together. Becca Ayers, who was in Sarah, Plain and Tall, which Larry wrote for TheaterWorks, will be there as will Debra Wiseman. I think I'm the only person from the New York Bat Boy cast will be involved.

JF:  Can we expect Battling Bat Boys in Boston?

DM:  No! There will be no battling Bat Boys ... We had talked about doing it, but we decided it would be best to let Boston have their Bat Boy. I'm going to be doing the songs Hightower and Pan got in the show, as well as other numbers. We thought it would be more apropos to have the original Bat Boy marrying off another Bat Boy and Shelly.

JF:  How long were you involved with Bat Boy?

DM:  I was part of it from its inception back in Los Angeles, so about four and a half years. In addition to the New York production, I was in the three New York workshops and a production in Los Angeles that lasted about three months.

JF:  Is Bat Boy what brought you to New York?

DM:  Yes. I didn't want to come to New York without a job or purpose. I know too many people who have come to New York with hopes and dreams and aspirations, only to have them dashed by how hard it really is to find a foothold in this city. Some people are really lucky in that they can come in cold, work hard, and get noticed. But I knew that with Bat Boy I definitely had a better shot of getting noticed in this city.

JF:  Given that you've been associated with the character for so long, is it going to be fun switching over to other characters?

DM:  It will be. When I was asked to do the 'Battling Bat Boy' thing, I didn't want to do it; I wanted to maintain the memory of the show. I'm looking forward to doing Hightower because the material is really fun to sing. Trent did such an incredible job of creating the character and the rehearsals for this weekend's show were really fun because I got to do some the things he did that I thought were so much fun when I saw him do the part ... and expand upon them and make them my own, of course (laughs).

JF:  Are you working on any other theatrical projects?

DM:  I have become the king of readings here in New York. I'm doing The Gondoliers again at the Roundabout with director Gabriel Barre and Neil Patrick Harris ... I don't know if Hunter Foster is doing it again. We all did it last year and we're doing it again in June.

I've also been working with Richard Maltby Jr. and his wife, Janet Brenner, on something called The '60s Project and the rumor is that it's going to go up again. It's such a timely project given the climate of the world right now. It features the popular music of 1960 through 1969 and focuses on a few people's experiences during that time and how war and all the changes of the era affected them. There are so many events that tie the two eras together. Kennedy's assassination was something that jarred the country; we didn't think something like that could ever happen. And the World Trade Center's destruction mirrors that; it's something that shocked us all because we never thought something like that could ever happen on our soil. And the fact that the baby boomers, who were the protestors and instigators of change in the '60s, are now the ones running the country makes it all the more timely.

DM:  Hopefully this summer we'll see another reading and hopefully it will move to Broadway or Off-Broadway. I have my fingers in a lot of pies and hopefully one of them will be served!

JF:  Have you ever thought about putting together a solo show?

DM:  I have. It's something that I haven't found the time to work on, though. I spend a lot more of my time dedicated to film and television work and writing. It kind of hit me that I had to be creative in a different way. While doing musicals is fantastic and something I have been doing for 16 years now, I'm leaning more towards creating things through writing right now rather than being on stage.

JF:  What have you been working on?

DM:  I have been finishing up a screenplay that I have been working on since the beginning of the year. Also, I just started working on writing a show with Douglas Maxwell, a record producer friend of mine. I really can't get into a lot of details about it at this point ...

DM:   Yes. He's writing the lyrics and music. He did the Off Wall Street Jam, which I'm not sure if you have heard about. Twelve years ago he went around with these inflatable headphones on his head and a red rocker wig and handed out flyers to all these Wall Street types and invited them to come over and jam at his place instead of working out. It turned into this huge thing with about 1,000 members; it's still going on today, in fact.

JF:  Do you have any movies coming out?

DM:  Yes. I did a movie last October called Temptation, which is modeled after Goethe's Faust. I actually did a little more work on it a few weeks ago. It's quite a fantastic film. Felicia Finnley, Alice Ripley, Michael Cerveris, and Adam Pascal are all involved. Adam plays the devil, in fact.

JF:  When is it going to be released?

DM:  They are just finishing up the animation; we did a lot of green and blue screen work and it's going to be an explosion of Technicolor. Hopefully it will be done in the next three months. They said two months a few weeks ago but it's like a kitchen remodel; it always takes longer than you think! (laughs). The movie takes place in a New York City nightclub and it was all filmed live with several digital cameras shooting at the same time ... so in that sense it was like a music video: you never knew which angle you were being shot from.

JF:  What part did you play?

DM:  The part had several different names, but I think Michael was the final choice. He's kind of the 'Faust' character. He's a pianist in the club and is in love with the lead actress. She makes a deal with the devil for her boyfriend to succeed and ends up saying to him, "After all I've done for you, how could you do this to me; how could you betray me." My character makes the same deal for her to have her own life and success and fly to the highest heights she can, but he maintains his purity of heart and doesn't let the selfishness of love come into his life. So I guess you could say he's the hero of the piece.

JF:  Wonderful! How can one find out about the dates of your projects? Do you have a website?

DM:  I do: www.devenmay.com. It's off-line right now but should be back up shortly.

JF:  Well best of fates on all your projects. I look forward to seeing them.

Show You A Thing or Two: the Music of Laurence O'Keefe, will be presented on Saturday, April 26 at 8PM and Sunday, April 27 at 3PM and 7PM at the Copley Theater, 225 Clarendon Street, Boston. On Sunday, April 27, your concert ticket will also get you in to SpeakEasy's annual silent auction event, where you could win theater tickets, travel packages, restaurant gift certificates, rare collectibles, walk-on roles and much, much more. For more information or to purchase tickets, call 617-437- 7731.